April Fool's Day was irregularly uneventful. We didn't do a single prank because every day melds into the next and none of us knew what day it was. Jake and I now struggle waking up because we don't know what day it is and it doesn't matter!

While it is definitely a new normal for us, we have been enjoying the time to be with each other. It's been uneventful and pretty repetitive, but we are seeing the beauty in a different routine and it's been great.

We went on many walks. We knew that April would likely be the end of the cool time of year, so we made sure to get outside and ride bikes, walk, and play. Emily often gets tired of riding her bike, so we now know to bring the stroller with us. We let her ride as long as she wants, and when she gets cranky about being hot or tired, we throw her in the stroller and she becomes a cool cucumber again.

After Emily's personal haircut in March, I decided it needed another few inches off to blend it better. Her smile reminds me of my mom in these pictures I took of her.

We had a wonderful Easter. We colored eggs, had an Easter lesson, and did egg hunts all day. We were trying to spend the day in Sierra Vista with my sister, but she lives on base and the base stopped allowing visitors the morning we drove down. We were bummed, but we all went and had a picnic before making the trek back home. Berit sent us home with a lovely salmon dinner, and some swag bag Easter baskets! She gave us water balloons and we quickly used them up, and now we just order them with every grocery pick up!

In less thrilling news, Gwen got bit by the dog at our sweet babysitters. It was a terrible accident, and all is well now, but here's the story. Gwen and Emily were missing their friends at Mrs. Chris's house, and Jake and I both had a lot of work to get done so we took them to her house. When we went to pick them up, they couldn't stop talking about how much fun they had. On the way out, Mrs. Chris let us know there was going to be a scavenger hunt the next day, and the girls couldn't stop talking about it.

Tuesday morning came, and the girls woke up begging to go. I had talked to Chris and let her know we'd probably drop off on Wednesday the night before, but with the girls begging we decided to do Tuesday instead. The scavenger hunt went great, they made clothespin bugs, and went swimming. Emily told us, and Gwen agreed later on (with one exception), that it was "the best day ever!"

Jake and I weren't there but here's what Jake said: Right when he got there for pickup, Mrs. Chris was at the end of handling the situation. In her words, Gwen was playing with friends, and she was chasing a friend. They were screaming and chasing, and she thinks her dog just got too excited, or thought the boy being chased was in need of help. Whatever caused it isn't important; but the dog got a hold of Gwen's ponytail (which could also be because it her ponytail looked similar to the dog's toy) pulled her to the ground on some rocky/dirted ground and pulled her. Gwen had large skid marks on both of her shoulders (she was wearing her swimsuit, so her back was very exposed), a few punctures on the bottom of her foot, and a few punctures on her stomach.

I had planned on using the water balloons to instigate the water fight, but when Jake pulled up, I had balloons in hand and Jake firmly told me to put them away because Gwen got hurt. To reiterate, Chris had just got her all cleaned and bandaged up when Jake got there, so she hadn't had a chance to call me. Jake told me she got hurt again, and I looked at a sobbing Gwen in disbelief because she had a shirt on and no visible injuries. It wasn't until I took her out of the car and into the house that I saw the damage. We got her on the couch, iced her up, and saw Mrs. Chris had texted me. She asked me to call her, and she came over later that evening with cookies and a sweet blanket and pillow.

Gwen has since showed some fear of other dogs. At the end of the month/early May, Berit visited with her dogs and they had to stay outside because Gwen was too terrified to walk around with them out and about. Our neighbors got two puppies, and G was petting them. One started nibbling at the ends of her hair, and she curled up into a ball and began silently weeping until I picked her up and brought her inside. She has some nightmares, and she occasionally is afraid of Fred if Jake plays with him, so we've relaxed our playing and know she will be okay with time.

We love Mrs. Chris. She handled it perfectly. She communicated as soon as she could, and the girls just love her. We're thankful for her, and thankful for her coming to visit that night. We knew Gwen would be okay, and we knew that it was just such a sad, circumstantial accident. We've talked to Gwen about it several times, and each time she says, "Mrs. Chris saved me. I love her." It stinks that it happened, but Mrs. Chris told us she would always keep the children and dog separated to ensure it wouldn't happen again, and that it was just an accident. When she came over, we hugged and she let us know the dog will be put away where the kids aren't. She told us that the dog had never had a problem before, and I know that. We've had the kids there for an entire year and the dog hasn't ever had any run ins with anyone!

A few weeks after the dog incident, Gwen ate an ice cream cone that was bigger than her face! Grammy Jan also sent a care package to the girls and they got to design a fancy headband! In other news, whenever Gwen and Emily are dressing super stylishly, it's all because of Jan. She has serious style!

Fred had a teeth cleaning and a surgery to remove a malignant tumor from his eye. 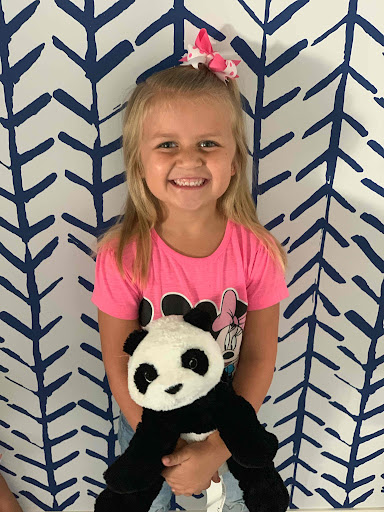 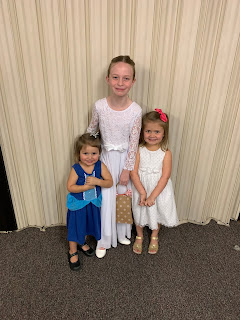