November started with a birthday trip for me! I was able to go on a girl’s trip with some sweet friends to California! We stayed at Esther‘s family’s beach house, which was just steps away from the most beautiful beach. It was a magical way to start my 30’s! I stayed in a room with Abby and Becky, and we constantly laughed/cried because of a loud train. We talked about it just the other day (in late December 2019) and still laughed about it. We ate out for every meal, and just played all day. It was wonderful.
I started a new job! I didn’t expect it to happen, but I applied with the local dental school for a hygiene faculty job and landed an interview the day before going to the Dominican Republic in October. It went very well, and while at JFK in New York, I accepted a full time position for the faculty position! I’ve made great acquaintances with several coworkers and am so happy to go to work in the morning. The girls have done well with the transition, too! I am really loving the schedule and the work, and I even have an office with my name on the door! It’s great!
Emily has been going full time to her day care with Mrs. Chris. When I accepted the job, I immediately told Mrs. Chris about the new hours, and she happily let us know it would work for her to watch Emily for the extra hours! This was great news because I was really stressed about how to handle that. I asked Emily what she would want and her exact words were, “I want to go to Mrs. Chris’ house to be with all my friends!” Done!
Gwen is still going strong in kindergarten. She loves her music classes most, struggles with some numbers, but overall just is blooming! It’s so much fun to listen to her talking about the important things that happened at school. She is so much fun! She loves learning new jokes and telling them to us! Sometimes the jokes are a little off and don’t make sense, but that makes it even better. I hope the jokester in her never fades.
Jake is doing amazing at work! He was able to get an assistant hired so he can get more surgical cases covered. He really loves the guy they hired and from the sound of it, there is serious potential.
-Gwen had track and field day before thanksgiving. She said it was the best day she’s ever had!
-Gwen lost her second tooth!!!! It was slightly more terrifying than her first and definitely louder. It didn’t hurt but she was just so scared!
-We hosted Thanksgiving at our house this year. We did it the day after (Black Friday) and it was great! It rained all day, but that made for fun conversation. When it finally cleared up, Caroline  and I plus a few teenager cousins all went to Target!
-WE SAW FROZEN TWO! It was amazing. We’ve now seen in twice, and have listened to the soundtrack approximately 329 times. It just gets better and better.
-We went to Home Depot for the Saturday craft and Santa was there!!!! The girls smiled and did t ask him for anything but Gwen told him she liked his belly. What does that count for?! 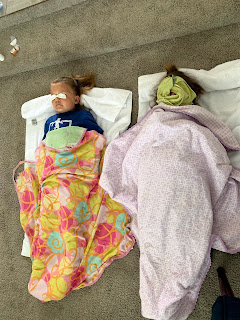